Interview with Bashar Kailani: Field Coordinator in Ukraine - Doctors of the World

MEET WITH ONE OF OUR FIELD COORDINATORS IN UKRAINE. BASHAR KAILANI IS CURRENTLY WORKING IN THE FIELD TO ENSURE THAT MEDICAL SUPPLIES REACHES THE MANY HOSPITALS IN NEED. 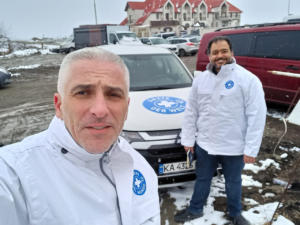 Before you came to Ukraine, you worked with Doctors of the World/Médecins du Monde in Syria. Did that experience help you for your work in Ukraine?

The Syrian experience did teach me a lot of things about how to handle the situation. I didn’t have the same feeling of panic that a person might feel who has not been exposed to that kind of situation before. You become much calmer with experience. This helped me a lot during the evacuation. It wasn’t a surprise, of course, but the steps in my head were very clear.

Could you talk a bit about the challenges when evacuating the team?

The most intense part of that trip was the part from Dnipro to Vinnytsia. All the gas stations that had fuel had huge queues, and you could only get 20 liters at a time. But I had that in mind from the Syrian experience. So I had my tank full, I was ready to go. We had enough water, we had enough food supplies for the road and the most essential files that we needed to keep with us, employment files for example. We had to take many detours, because of shelling and information about airstrikes. At some point, we were really low on fuel. The most intense moments were when you saw those jet fighters on top of your head, some of them very close to you. You could see the black smoke from the locations that had been attacked

You initially evacuated the team to Romania. Was it difficult to cross the border?

When we were trying to evacuate from Chernivtsi to Romania, there was a line of vehicles that was almost 12 km long. We had an SUV, so we were also able to go off-road a little bit and take a detour. When we came to another crossing, we saw hundreds of pedestrians, mostly Indian and African students. They were not allowed to cross the border. It was freezing cold. The small supermarkets and restaurants in the areas had mostly run out of food. But non-Ukrainians were also denied using the washrooms, even a cup of tea. Some of them had to light fires in the nearby woods to stay warm. Our team, the medical coordinator, the translator, the general coordinator, and I waited about 16 to 18 hours to cross. Sleeping in the car during the night, I was awoken by border guards apparently firing into the air to keep people from crossing by force.

Now you’re back in Ukraine, among other things, working on supplying hospitals and health centers with badly needed medical supplies. Can you explain why this is such a difficult and sometimes long process?

There are some hospitals that cannot get their medical supplies, although they bought them. They just sit in the warehouses somewhere because the war has interrupted the supply chain. Some contractors’ trucks have been destroyed, some use fuel that is rare to find, some routes have become longer, so now there is a higher price rate. Some truck drivers have also left the country or are unwilling to go to certain locations. Then there are the highways. Many of them are just one or two-way roads and there are a lot of traffic jams – also because of the massive IDP movement in some areas. A trip that would normally take about eight hours can take you twice as long.

How does MdM manage to support health facilities with medical supplies, nevertheless?

To overcome these challenges, you need to build a big network with lots of private contractors or suppliers and lots of community-based organizations. For example, we have supported a hospital in Donetsk oblast to get lifesaving items to carry out dialysis from Kiev. The hospital purchased the items before the war was declared, but because of the war the supplier could not deliver. So we identified a transport company that was willing to pick up the items from the warehouse in Kiev and bring them to Donetsk.