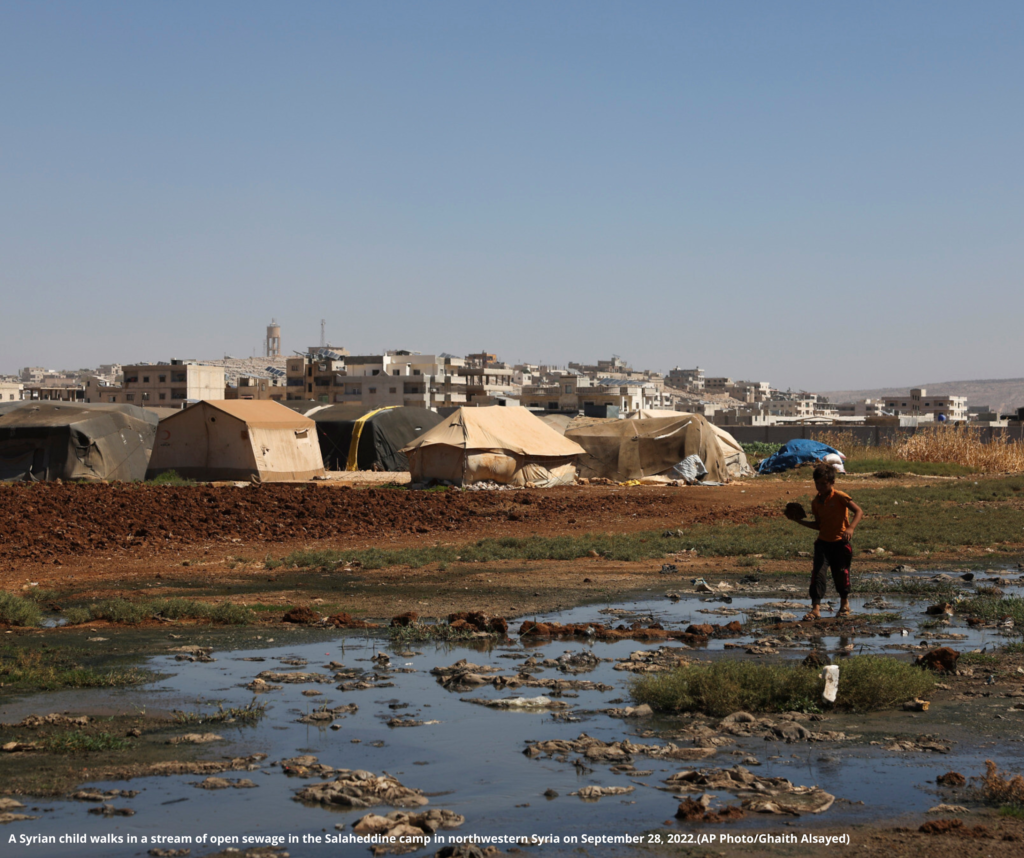 suspected cholera cases as of Nov 16

of the hospitals in Syria are operational

The war in Syria has been ongoing for nearly 12 years, with millions of civilians trapped in the conflict and millions more fleeing to neighboring countries and Europe. Besides the hundreds of thousands that have died in the conflict, the continuous air raids and bombings have shattered much of the countries infrastructure, leaving them without access to clean water, healthcare, and food. In fact, the conflict has seriously damaged the water and channel networks, resulting in a decreased supply by 40% while only 52% of the hospitals are operational under harsh conditions.

Without clean water and secure healthcare, a cholera outbreak has begun to spread throughout Syria. The situation is dire, requiring urgent and sustainable action to further prevent the destruction of essential infrastructure and the further deterioration of the humanitarian and health situation for the most vulnerable people.

The outbreak has mainly spread in the northern part of the country, beginning in September 2022. The first cholera case was confirmed in Jarablus district of the Aleppo Governorate on September 19, while a total of 10,750 suspected cholera cases have been reported as of November 16 from North West Syria with about 33% of suspected cases from IDP camps. 10 people have lost their lives due to cholera, and 311 were tested positive so far.

The outbreak occurred due to a contaminated water well in the region. It is a keen reminder as to why it is so important to continue to support and sustain critical infrastructure, as well as establish humanitarian corridors so that essential services may be safely delivered.

“People in Syria are paying the price of almost collapsed healthcare infrastructure in addition to struggling with serious consequences of the bloody war and economic downturn. Water and sewage systems in the region are also on the verge of collapse – which leads to poor conditions for hygiene and sanitation,” Mohamad Şahin, Doctors of the World (DotW) Turkey’s Syria Programme Coordinator, reported from the field.

DotW Turkey has mobilized its team to address the growing cholera outbreak. So far it has directly reached 2,458 people and indirectly 12,290 people in need, focusing on preventative measures. Şahin adds, “We join the fight against the cholera outbreak in North West Syria by delivering awareness-raising sessions about cholera prevention through community health workers. We also increased the oral rehydration solution stocks for quick intervention in cholera cases since the disease requires immediate treatment and it can cause death within hours.”

“The number of people living in DotW Turkey’s catchment locations for ongoing facilities in Afrin, including Afrin Central, Jandairis, and Jalama subdistricts, is 176,198,” he informed.

The Cholera Task Force, which was formed to fight the outbreak in Syria under the leadership of World Health Organization (WHO), states that there is a need for further support to set up Oral Rehydration Points across highest affected subdistricts to complement community and in-patient cholera treatment activities along with the establishment of cholera treatment centers and units across highest affected subdistricts.

However, meeting these needs remains a challenge, hindered by the conflict and a lack of financial support. The 2022-2023 Humanitarian Response Plan for Syria has only 27% of the necessary resources. Health financing represents barely 16.7% of the aid provided, with a gap of 484 million dollars, while nutrition financing reaches 10.7% with a gap of 11 million.

It is of utmost importance that the humanitarian organizations and the global community collaborate to fundraise and implement an immediate humanitarian response for Syria. We need to ensure that humanitarian corridors are established, that critical infrastructure is restored and that this cholera outbreak is quickly contained.