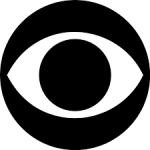 A lot of the doctors offices have closed down and not really reopened again, so there’s still a huge gap in the number of providers in the area.

Doctors of the World In the News

NY1 (December 12, 2013| NEW YORK) In the Rockaways there is a high population of uninsured adults, high incidence of chronic diseases and very few local doctors. Doctors of the World decided to set up the Rockaways Free Clinic after a year of providing medical relief to those affected by Hurricane Sandy. Program Coordinator, Noah Barth says, “We felt that in doing the relief work Post-Sandy that we had made a commitment to the local community and wanted to make good on that and stick around long-term,” of the Rockaways Free Clinic which has been open for two months and is booked full for the next three weeks. Watch Here. 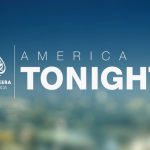 Al Jazeera America Tonight (November 14, 2013| USA) Many of the organizations do have the capacity to deliver appropriate services as quickly as possible. Doctors of the World has been working in the Philippines for many years, partnering with local Filipino organizations. Having a professional corp of responders to these emergencies is essential. Watch Here. 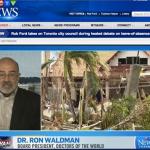 CTV News (November 13, 2013| CANADA) It’s of the greatest importance to bring relief supplies in as quickly as possible. First on the list should be hygiene kits to disinfect water as well as improving the sanitation facilities. Providing adequate shelter is also essential so that people can protect against the elements and the threat of diseases carried by mosquitoes and other insects. Watch Here.

Dr. Ron Waldman Interviewed on Disaster Response in the Philippines

HuffPost Live (November 13, 2013| USA) Providing food, water and shelter is disease prevention and is essential to early stages of relief. In the longer term, because amongst those buildings that have been destroyed are hospitals and health clinics, there’s a rebuilding process that has to begin as soon as possible. Doctors of the World has already pledged to remain in the affected area for at least 12 months. Watch Here.

Doctors Of The World Opens Free Health Clinic in The Rockaways 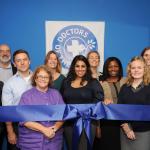 The Queens Courier (November 2, 2013| NEW YORK) The Rockaways have a new, free health clinic during a time some have called a “health crisis in the borough.” Doctors of the World has officially opened its doors to “an overwhelming response so far,” reports Dr. Amber Featherstone, medical director at the new clinic. Read More. 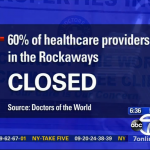 Eye Witness News WABC-TV (November 2, 2013| NEW YORK) With 60 percent of healthcare providers in the Rockaways still closed, many doctors ask is it worth it to rebuild? Doctors of the World works to fill the gap in healthcare provision with the opening of the Rockaways Free Clinic. Watch Here. 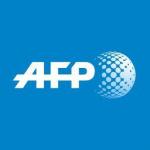 Agence France-Presse (October 27, 2013| FRANCE) A year on, the suffering wrought by Hurricane Sandy is still acute on the Rockaways. Daily disruptions exacerbate the health side effects of the hurricane, said Program Coordinator Noah Barth. The after-effects of Sandy have caused mental depression, post-traumatic stress and anxiety and poor nutrition is a big issue. Read More. 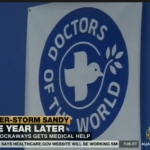 Al Jazeera America (October 26, 2013| USA) Almost 1 year ago, Superstorm Sandy slammed into the East Coast. One of the areas hardest hit was the Rockaways. The storm shut down crucial services like healthcare centers and now, a year later, most of them haven’t re-opend. One international aid organization is stepping in to fill the gap. Doctors of the World offers free primary and preventative care to local residents. Watch Here. 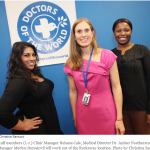 TIMES Ledger (October 25, 2013| NEW YORK) Doctors of the World USA, the American delegation of the Médecins du Monde international healthcare network, held a grand opening Saturday for its Rockaways Free Clinic, at 230 Beach 102nd St. The public health organization had boots on the ground in the peninsula about a week after Hurricane Sandy, making home visits to storm victims. Now, before the one-year anniversary of Sandy, it opens the doors to a free clinic for adults without health insurance. Read More. 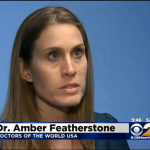 CBS NY (October 24, 2013| NEW YORK) The Rockaways is a community still recovering and rebuilding. While the power is back, the heat is on and many residents are back in their homes, one service that is still lacking is healthcare. Doctors of the World is helping with a free health clinic. Watch Here. 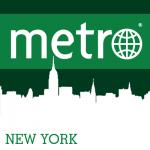 Metro NY (October 21, 2013| NEW YORK) Even before Superstorm Sandy struck, the Rockaways made up one of the most medically-underserved communities in the city. Rockaways Free Clinic organizers aim to remedy the worsening crisis, hoping the clinic will fill a healthcare gap in neighborhoods suffering from already-high rates of chronic disease. Read more.

NY1 (October 20, 2013| NEW YORK) The Doctors of the World Rockaways Free Clinic, which opened its doors to the public for the first time last Saturday, was founded in direct response to the need to help the neighborhood after Hurricane Sandy. “As we were building these relations with the community and seeing people, we really felt committed to stay long-term, and that’s when we started approached the idea of opening a free clinic and trying to understand if this was something that we could really do and that the community really needed,” said Noah Barth, the program’s coordinator. “We’re happy that now, less than a year after the storm, this free clinic is open. Watch Here. 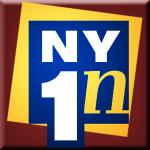 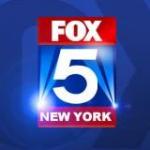 Doctors Of The World Clinic Open 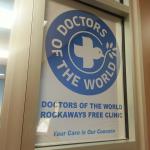 The Wave (October 18, 2013| NEW YORK) The Doctors of the World free clinic in the Rockaways is ready to open its doors. The group is holding an Open House for the community from 10 a.m. to 2 p.m. on Saturday, October 19th. Read more. 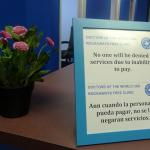 NY Daily News (October 17, 2013| NEW YORK) Doctors of the World USA will open a free health clinic on Beach 102nd St. next week to treat locals who are dealing with a perfect post-Sandy storm: no health insurance and fewer medical facilities nearby. Read more. 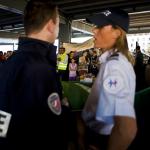 ABC News (September 25, 2013| FRANCE) “What we see on the ground is a break with the stereotypes of social and sanitary problems, and other clichés that are being invoked now,” said Jean-Francois Corty, a doctor with Medecins du Monde. “Most of the people we see want to integrate, want work, want their children in schools and want the benefits of modern medicine.” Read more. 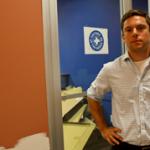 WNYC (September 23, 2013| NEW YORK) Noah Barth is the program coordinator for the charity and said while Doctors of the World usually operates in distressed parts of the world, it was clear that residents of the Rockaways had severe medical needs…He’s hoping the clinic will be ready to open before the one-year anniversary of Sandy in October. It will offer free medical services to the uninsured, (an estimated 21 percent of Rockaway residents have no insurance) as well as undocumented residents and will run on donations. Read more.

As Needs Grow in Syria, Funding Gap Must Narrow 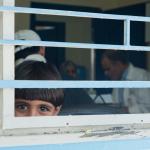 Thomson Reuters (September 19, 2013| UK) One thing that is certain is that when aid does reach Syrians, the difference it can make is huge. Doctors Of The World is one of the few organizations with doctors in Syria providing life-saving primary and mental healthcare to thousands of Syrians, as well as in Lebanon and Jordan. Read more.

France 24 (September 18, 2013| FRANCE) Organisations representing sex workers claim it would push prostitution further underground and subject women to increased risks. AIDS advocacy group Act Up and French NGO Medecins du Monde (Doctors of the World) were among around 100 organisations who signed a petition against the proposition, arguing that it would “make prostitutes more vulnerable”. Read more.

Doctors and Health Professionals Warn of Medical Crisis in Syria

Free Speech Radio News (September 16, 2013) FSRN interviews Dr. Ron Waldman, Board President of MdM USA and a signatory of an open letter published in the medical journal The Lancet. He discusses the worsening humanitarian situation in Syria and the lack of access to medicine and healthcare. Listen here. 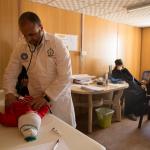 The Lancet (September 16, 2013) Board President of Doctors of the World USA, Dr. Ron Waldman, joins 51 other doctors in demanding access to Syria for medical professionals to save lives and alleviate suffering. They call on the Syrian government and all armed parties to refrain from attacking healthcare facilities and to allow access to medical care for all patients. Read more.

Another Casualty of Syria’s War: Its Medical System 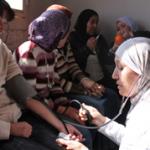 U.S. News & World Report (September 5, 2013 | USA) In Syria today, the unmitigated violence is what generates attention grabbing headlines and disturbing images seen around the world. Mortar blasts, sniper fire, fighter jet sorties and, maybe even, chemical warfare are only the most spectacular of the threats to civilians throughout the country. Read more. 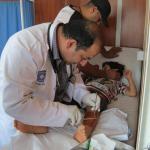 Thomson Reuters (August 30, 2013 | UK) As the numbers of casualties in Syria’s protracted civil war continue to escalate, international humanitarian health charity Doctors of the World has called for an immediate cessation in hostilities to enable to reach and treat all those in medical need. Read more. 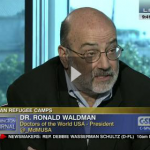 C-SPAN (August 25, 2013 | USA) Dr. Ronald Waldman talked about his humanitarian mission to Turkey, Jordan, and Lebanon, to examine the health impacts of the Syrian civil war. He also discussed the work of Doctors of the World USA and the state of vulnerable populations across the globe and their access to health care, and he responded to telephone calls and electronic communications. Watch here. 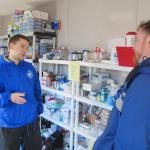 The Wave (August 16, 2013 | NEW YORK) Doctors of the World USA will be providing free health care access from a clinic in Rockaway Park. The organization, which has offered services around the community since Hurricane Sandy hit, recently leased a property at 2-30 Beach 102nd Street, which will become a health clinic sometime in the next few months. Read more.

Doctors Of The World to Open Free Clinic in the Rockaways 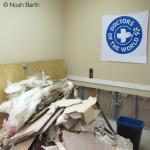 The Queens Courier (August 9, 2013 | NEW YORK) At the clinic, Doctors of the World will provide free service to the public, including the uninsured, thanks to a reliable donation foundation. Read more. 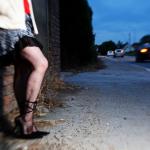 The Daily Beast (July 31, 2013 | FRANCE) The nongovernmental organization Medécins du Monde (Doctors of the World) has worked closely with these women for nearly 10 years—it runs a mobile medical facility called Lotus Bus, which visits the women on the streets where they work. The service is offered in Chinese, as most of the women speak little French, or none at all. While receiving medical attention, the sex workers also are given legal help in terms of understanding their rights and how to take care of themselves. Read more. 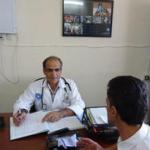 TIME Magazine (August 7, 2012 | PARIS) “It is one of the first times in history in which medical staff are so systematically targeted,” says Patrick Villedieu, Deputy Director of International Operations for the Paris-based Doctors of the World, which treats Syrians in refugee camps in Lebanon and Jordan, since it is banned from operating in regime-held Syria, and regards the rebel areas as too dangerous. “We could save a lot of lives if we could work inside Syria,” Villedieu told TIME on Tuesday. Read more. 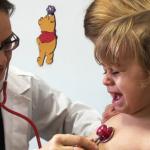 New York Times (December 26, 2011 | PERAMA) At the Perama clinic, which is run by the international nonprofit Doctors of the World, doctors say they are seeing many families that cannot afford bus fare, let alone the new $6.50 fee at public clinics. Read more.