Doctors of the World Action Plan for Rohingya Refugees in Malaysia

According to the United Nations, Rohingyas, an ethnic Muslim minority living primarily in Myanmar’s Rakhine State, are “one of the most persecuted communities in the world.” This is hard to dispute when the global media began broadcasting the genocide of Rohingya refugees at the hands of the Myanmar military. Before the start of the ongoing genocide in 2016, the Rohingya community faced intense discrimination, persecution, and statelessness at the hands of authorities.

This genocide is an escalation of long-term oppression, with over 200 villages destroyed and currently 600,000 Rohingya’s confined in camps, subject to persecution and violence, with no access to food, security, education or care. A further 980,000 refugees are estimated to have fled to neighbouring countries, however for many conditions have not improved significantly.

753,965 have fled to Bangladesh, where the majority are trapped in camps like Cox Bazaar. Conditions in these camps are dismal, with poor health services and no opportunities to work or receive an education. This has led many to flee Myanmar and Bangladesh, both by land and overseas, to go to Malaysia in hopes of a better life.

Doctors of the World (DoTW) has worked in Bangladesh since 2017 to address the needs of Rohingya refugees that are held in camps there. However, the circumstances in Malaysia have shown us that we must extend our care to the Rohingya’s that are living there. Currently 181,500 asylum seekers and refugees are reported in Malaysia by UNHCR, although it is estimated to be much higher as many remain undocumented for fear of persecution by local authorities. We have conducted 2 fact-finding operations, one focused on the journey taken overseas by Rohingya refugees (Maritime Ambition), and another on the conditions of Rohingya refugees in Malaysia. Our findings have convinced us that we must begin a project in Malaysia to support local relief organizations to address their needs.

Maritime Ambition: Mapping the journey from Myanmar and Bangladesh to Malaysia.

Due to the intense overcrowding and lack of care and opportunities to work, many Rohingya refugees have fled Bangladesh (as well as Myanmar) to go to Malaysia, despite the risks of the journey. Although no one pattern can be determined, the migration happens both over land and sea, where refugees are exposed to the same risks of human trafficking, violence, and even death.

Women and children have also begun to take part in this migration, but they are even more exposed to danger. Human trafficking runs rampant, and many girls, some as young as 13 years old, are exploited and sent off to marriage once they reach Malaysia. UNHCR reports that 66% of persons rescued at sea are women and children. 218 are said to have died or gone missing at sea between 2020 to 2021, however that number is likely to be even higher.

The Status of Rohingya Refugees in Malaysia

When Doctors of the World began collecting data on the challenges of Rohingya refugees in Malaysia, it became clear that there were a lot of issues, and many of the problems that Rohingya’s fled are still present. Malaysia is not a signatory to the 1951 Convention relating to the Status of Refugees and its 1967 Protocol. So by law, refugees and asylum seekers are considered undocumented migrants.

Currently, UNHCR is involved in supporting the Rohingya refugees, however their ability to act is incredibly limited due to the Malaysian government. Rohingya refugees are able to get registered with UNHCR and receive an identity card. Of the 181,500 registered, 25% are children under the age of 18 and 33% are women. Since Rohingya’s are seen as undocumented migrants, they are unable to participate in Malaysia’s healthcare program or legally work. 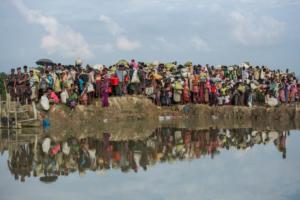 Although the UNHCR is negotiating with the government to grant Rohingya’s 50% off healthcare related costs, accessing care is still too expensive for many refugees. Furthermore, many Rohingya’s have been forced into detention centers as a result of the stigmatisation and discrimination they face from local authorities. The UNHCR and many NGOs are unable to enter these detention centers. In April this year, a riot in one of these detentions saw many refugees attempting to escape. The crackdown was violent and those that escaped were hunted down as if they were criminals, some of which were children. Rohingya’s face the biggest discrimination among the refugee population in Malaysia, with many being deported back to Bangladesh and even Myanmar, where they face persecution.

Within the area of healthcare, Doctors of the World has identified 3 key gaps. The first focuses on Gender-Based Violence (GBV). Violence is embedded in most of refugees’ lives, women and girls in particular. Many are forced into marriage and pregnancies at a young age, and face limitations within an incredibly patriarchal society. Vulnerable populations are left without protection services or access to healthcare.

A second key gap is Sexual and Reproductive Health (SRH), with education in particular being a prevalent issue. Many are unaware of the services they need to meet their SRH needs, and even fewer are provided.

The final gap is Mental Health and Psychological Social Support (MHPSS). Currently, there are no MHPSS services to Rohingya’s, despite the trauma they endured in Myanmar and abroad. PTSD, depression, anxiety are all prevalent among refugees that have endured conflict and state-violence. Providing MHPSS services is vital to improving the overall wellbeing of Rohingya refugees.

With these 3 key gaps identified, Doctors of the World has built an Action Plan for Malaysia, that will seek to work in collaboration with other organizations to provide Rohingya’s the care they deserve.

Since conducting the fact-finding missions for Rohingya refugees in Malaysia, Doctors of the World has started up a humanitarian mission in Malaysia in order to respond to the regional crisis affecting Rohingya’s and other refugee populations in accessing health services.

In 2021, DoTW established a collaboration with 2 humanitarian organizations in Malaysia: Mercy Malaysia and Malaysia Relief Agency. In partnership with these local associations, DoTW aims to improve the access of refugees, asylum seekers and migrants to quality health services: the objective is to guarantee access to SRH rights and services (including for the prevention and response to gender-based violence), as well as to more specialized services in mental health and psychosocial health. DoTW is further developing a community-based project that will incorporate health centers and mobile clinics, while contributing to capacity-building of local organizations.

Further collaboration and exchange of knowledge and advocacy will take place with other key actors involved in this crisis. DoTW will support UNHCR and UNFPA to fight for the rights of refugees to gain access to protection services. We will also provide data and support to Asia Pacific Refugee Rights Network as they become the lead in advocacy for the refugees in this region. Thanks to the experience of MSF with local authorities in Malaysia, we will also learn how to ensure that our projects can be successfully implemented.

As more Rohingya’s flee to Malaysia, it is vital that the national government and global community work together to ensure that refugees feel secure and safe, and their fundamental human rights are respected. This must extend beyond Malaysia, to Myanmar, Bangladesh and other host countries. Until the persecution, discrimination and stigmatisation of Rohingya’s end, the crisis will only continue to escalate. Doctors of the World has long taken a human-rights based approach, focused on empowerment and health. With our missions in Bangladesh and Malaysia, we will continue to support Rohingya refugees as best as we can.

Malaysia, Our Actions with Rohingya Refugees and Asylum Seekers

Consequences of Winter in Ukraine