Iraq - Doctors of the World

Since the early 2000's, Iraq has struggled from instability and ongoing conflicts

However, the rise of the Islamic State in the northwest of the country in 2014 caused considerable chaos and loss of life. After the group gained territory across large swathes of Iraq, more than 3 million people became internally displaced (IDPs), or fled to border countries such as Turkey and Jordan as refugees.

Almost half of those fleeing took refuge in Iraqi Kurdistan, including thousands of ethnic Kurds and Yazidis. The conflict significantly weakened Iraq’s health infrastructure, and over 35% of Iraqi doctors fled the country. Although military operations against ISIS officially ended in December 2017, insurgent groups are still active in certain areas of Iraq.

Of Iraqi doctors have fled

Our teams work alongside the Iraqi government to provide medical and psychological assistance to refugees and IDP populations. In 2017 we provided over 135,500 medical consultations across the country.

Doctors of the World operates in multiple governorates including Ninewah, Kirkuk, Hawija and Dohuk – where we work in the largest IDP camp in the region. Chamisku IDP camp currently provides shelter 27,000 people and we conduct around 250 medical consultations a day there. Many members of our team are refugees or IDPs themselves. 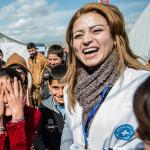 The most essential thing is to listen to people. I often see patients three or four times and their story is usually similar to mine. I do not prescribe medication, but I try to give advice to reduce stress. I try to be positive, to say the right thing and to bring some comfort. If their condition worsens, then they see a doctor and sometimes go to the hospital.

In 2016 we expanded our operations during the battle to retake Mosul from the Islamic State. The battle resulted in the forced movement of thousands of people trying to escape the fighting between the Iraqi government and IS.

We currently operate in small towns such as Kalata Farhahn, 12 miles from Mosul, where many have taken refuge. Most of our patients have witnessed shocking human rights abuses, such as acts of torture, executions and enslavement. This causes significant emotional trauma, and as a result our patients require critical psychosocial support to help them cope.

Zere and Ishmael are from the Yazidi community and have been living in Chamisku IDP camp since 2014.

“We had no choice but to flee when ISIS invaded our village in Sinjar. I remember when we fled, leaving in the morning before they entered the village at 2pm. Others were not as lucky as we were. They did not escape. We have suffered persecution and forced displacement, but we have never experienced anything like what we went through 5 years ago. It is beyond description.

Life in the camp as a displaced person is far from easy, we face daily challenges related to the lack of electricity and food; and we are uncertain about the future.”

In addition to providing individual counseling, our teams also provide group counseling sessions and psychosocial activities for children affected by the violence. We also conduct trainings for local medical and paramedical staff.

Ghazwa Breassam, a mother of 2 children who fled Mosul with her family, provides consultations. “About 1 in 10 women who come to visit us are pregnant and there are often complications with the pregnancies. Many have undergone tremendous stress due to trauma. Even though they are safe here, it’s difficult to carry a child and give birth in this environment. We provide advice on family planning and a lot of emotional support,” says Ghazwa.

Exploring mental health needs in the Syrian and Iraqi Crises.